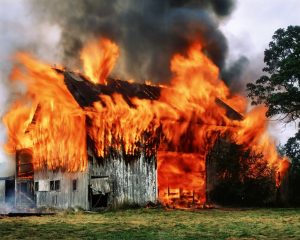 The discovery of fire is perhaps one of the most important discoveries made by man. The early man could cook food, and could keep himself warm. Today, fires have supported many businesses and many economic activities. However, man did not envision that the same fire that is helping him could destroy him. Today, American farmers go through painful experiences in the aftermath of a fire.

Whereas fires have an adverse effect on almost every state, the following are the states which are most vulnerable to fires:

This paper explores the problem of fires in an American farm. It offers the solutions thereof, and justifies why fire protection engineering is important for the farm.

Impact of Fires in American Farms

Fires in the US have destroyed the stock that is owned by farmers. For example, in July 2020, a chicken farmer in New Jersey who owns Red Bird Egg Farm cried foul over the destruction of 300,000 chickens. Because the fire erupted at night, it was very difficult for the farmer to seek timely help. The chief at the Manning Fire Department admitted that it was not easy to bring the water into the farm due to logistical problems.

Fires in farms are a big risk to the agricultural workers. Agricultural works play an important role in extending farming advice to the farmers. The good thing is that some of these professionals are provided by the state. However, when such workers visit your farm, you need to ensure that they are protected.

The most important resource that sustains agriculture is soil. Unfortunately, in the modern American society, meeting immediate needs has taken precedence over meeting the long-term needs. Burning on long slopes or steep slopes leads to soil erosion. Repeated fires on rocky areas leads to drastic degradation of soil. Some types of soil face a higher level of degradation than others. Sandy soils can be eroded in an easier and faster way. Similarly, a water run off on clay soil leads to gullies. When fires occur, chemicals can be used to eliminate the fire. In such a case, the quality of air is affected.

The impact of fires on a farm can lead to cases of stress, as well as other mental health issues. Most of such cases occur in the case of a serious injury, or in the case of death. Such mental effects can last in the mind for a long time making it hard to erase such bitter memories.

There are farmers who practice farming in order to sell the trees, or as a part of landscaping. Fires could affect the growth of trees. If there are repeated fires in a certain community, the number of trees in the community is going to reduce, and so is the quality of the environment. 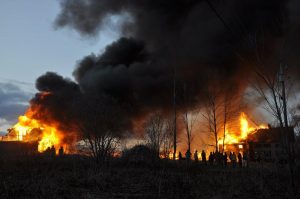 Why Fire Protection Engineering is important for a farm

The fire protection engineer has the necessary tools and resources which will help in safeguarding your farm against any possible fire. He will roll out an efficient, practical, and cost-effective guide on the best ways of managing fire at the farm. Now that the fire protection engineer you have chosen is an experienced one, he or she is going to use past case studies in order to assist you in the best way possible.

If your employees know that fire could break out in your farm, they are not going to feel safe when working with you. In addition to that, they do not want to deal with the legal problems that can come in the case that fire breaks out in the farm. Investing in your fire protection engineering is going to assure the employees that they are working in a safe place. They will also feel that in case a fire breaks out, they are not going to be held responsible.

Fire protection engineering could be a matter of law. Legislation regarding fire safety applies to the farms where people work. As a matter of fact, legislation on fire safety does not apply to the farm only, but extends to the farm houses as well. A fire risk assessment is required by law if one has employed more than five people. It is your responsibility to obey the legislation regarding fire. Failure to do so could lead to persecution, prison sentence, or loss of business.

Remember, as a farmer, you are offering critical products and services. In fact, you are dealing with the health of the people. Authorities must ensure that your work is legally conscious and that you are following all the prescribed laws. Failure to do this will lead to harsh consequences and a conflict with the authorities.

A fire protection engineer is going to help you in the process of fire risk assessment. This process starts with identification of hazards. Such hazards include sources of ignition, sources of fuel, and dangerous substances. Second, fire risk assessment is going to protect the people who are at risk. These include people who are living in farm buildings and groups of people who are vulnerable to fire. In such a case, it is your responsibility to have an early advance system in order to ensure optimal fire protection outcomes.

The step of evaluate is very important in fire risk management. There is a need for evaluation that fire would start. There is also need for evaluation that in order to reduce or eliminate fire hazards. One should aim at protecting the people from fire. These include showing the escape routes. In addition to that, a farmer should ensure that a comprehensive warning system is put in place in order to give the necessary help when time comes.

Fire risk assessment cannot be done by one individual; there is a need for comprehensive collaboration with others who are competent as far as the issue of fires is concerned. The good news is that the community is full of people who are responsible, and they can help you in the anticipation of risk. In addition to that, the state and local authorities have professionals who can join your team and give insight.

Working with a fire protection engineer is going to help you to prepare for the possibility of arson. It has been reported that 40 % of all the fires in the US are deliberately started. It has also been reported that 40 % of the businesses that are affected by fire do not get back to their feet again. These are situations that you need to be aware of and avoid them early enough.

Unfortunately, it is very difficult to prevent fire in your farm. This is because some of the causative factors are beyond your country. However, there are various recommendations in fire engineering that could be of great help to you, and these include the following:

-Remove hay and straw from the farm from the field. When you are storing it, it should be separated from livestock houses.

-If someone is to start arson in your farm, he has to have enough fuel. Protect your petrol and diesel and make sure that it is inaccessible to unauthorized party.

-Safely store the pesticides as well as fertilizers

-Make sure that you carry out the electrical checks

Having stated that, fire protection engineering will help you in the case that a fire breaks out. The first thing is that you should call the fire and rescue department that serves your locality. As a farmer, you could be located in a remote area. In such a case, time is of essence, and you need to give the exact direction on your location.

Unfortunately, many farmers try to fight the fire on their own. Whereas this is possible, such a move is not only unsafe but could lead to loss of life. It is better to wait for the professionals in order to be safe. When you call the fire department, be sure to send someone at your farm gate, someone who can guide the fire department on going around the farm, and the affected parts.

Most people know about climate change as part of the news. However, as an American farmer, you are going to come face to face with the impact of climate change. If there is a state that is vulnerable to fire, then that state is California. As a matter of fact, fires in California have left a permanent scar among the poor, the disabled, and the elderly. Communities in California have been devastated by fire. In California, climate change has damaged the agricultural roots of the state, which run deep. The New York Times describes California as aflame due to the rampant incidences of wildfires.

Help in the Court Process

Unfortunately, you could be taken to court due to the aftermath of a fire that started in your farm. Such litigation could be based on loss of life, injuries, and loss of property. If you want to win a court case, it is important that you seek the help of the professionals who are working in your case, and they can help you in the justification thereof. Alternatively, you can seek an out of court settlement which can be cheaper and faster. In such a case, the fire engineer is going to be of help to you.

In the case of legal proceedings, either in court or alternative dispute resolution, it is important that you give evidence that you had laid concrete measures on fire protection. Whereas a case may go either way, people who have a higher probability of winning a case are those who show that they did not neglect safety measures.

For example, if you show that you had hired a fire protection engineer, and you did as he or she had advised, then the court could be lenient on you. Therefore, it is important that you prepare yourself early for any eventuality. Whatever you do, have your documentation in place.

Positive Use of Fires

At one time or the other, you are going to make use of the fire in order to start a fire. Rather than doing this on your own, contact a fire protection engineer. He or she will look at the purpose of the fire, the targeted areas, and the possibility that the fire could go out of hand. The following are circumstances that could warrant the use of fire:

From the above circumstances, the fire has to be prescribed, and it has to be done from an expert position.